AS have an article in their Tuesday edition which somewhat celebrates Angel Correa after his crucial goal for Atletico Madrid at the weekend.

Correa helped Atletico to a 2-2 draw against Girona, and it’s further cemented his importance to Diego Simeone, even if that means coming off the bench.

The Spanish newspaper say Correa could have left Atletico Madrid this summer, looking for prominence elsewhere. A Liverpool offer of €28m, which we believe was reported in the English press in July, is mentioned, but it wasn’t enough to shake Atletico.

Simeone is a big fan of the 22 year old, and the only way he was going to leave Atletico was on loan, there’s no suggestion from AS on whether Liverpool actually offered that option.

Liverpool’s €28m would have represented a good profit for Atletico, and would have had a 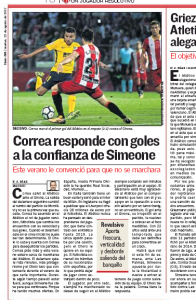 better chance of success in different circumstances. Atletico’s current transfer registration ban means that Correa becomes even more important than he would have been.

The Argentine youngster is also in the process of getting Spanish citizenship, which would allow him to be registered as an EU player, not taking up a non-EU Atleti space.

Perhaps the right bid for Liverpool, if it’s correct it was made, but the wrong time for it to be successful.