Luis Díaz’s form for FC Porto has drawn attention from Liverpool and their interest in the winger has already been discussed in Portugal and in South America over the past few weeks.

It’s now discussed in Spain as Marca explain the Reds ‘want him’. The newspaper’s main focus is on Atlético Madrid maintaining an interest in Díaz, after failing to sign him in the last window.

Diego Simeone’s side take on Porto today and failure to win will see the La Liga side fail to progress further in this season’s Champions League. The Colombia international is a great threat to Los Rojiblancos making it to the knockout stages of the competition.

Regarding Atlético’s interest, the report explains they will continue to have Díaz in their target list. 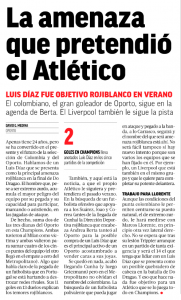 He has 12 goals and three assists from 20 matches this season and following his explosion, it will not be easy for the Madrid club to make another attempt to sign the player.

When talking about suitors, Marca say Jürgen Klopp’s ‘follow the track’ leading to the South American.

Liverpool watched Díaz closely when they faced Porto twice in the Champions League this season. The Premier League side’s interest in him is causing concerns for Atlético.