According to reports going back over a year, Jürgen Klopp is a big fan of Kylian Mbappé and he wants Liverpool to make an attempt to bring the Paris Saint-Germian star to Anfield.

The Reds have been in the picture for signing the forward and Klopp has reportedly been in regular contact with the player and his entourage.

PSG have so far not been successful in their efforts to convince the 22-year-old to sign an extension as his current deal expires in 2022.

On March 10th, Cadena SER reported the France international has turned down three renewal proposals from the Ligue 1 winners.

L’Equipe on Friday explain the World Cup winner receives a gross salary of ‘little more than €25m’ this season and the figure will rise to €26.5m for the next campaign. The number should ‘exceed €30m’ if he signs an extension.

Mauricio Pochettino’s side are ready to make an effort to retain the former AS Monaco man, even though their finances are impacted by the global pandemic.

The departures of Thiago Silva and Edinson Cavani last summer have helped PSG save €1m per week in gross salary. Ángel Di María has also taken a pay cut after signing a new deal. This is all ‘additional good news’ for the Paris club.

However, Mbappé and his camp have stressed money will have no bearing on his decision to sign an extension. He has delayed the decision, waiting to know more about PSG’s sporting project and summer transfer business, before deciding to put pen to paper over a new contract.

L’Equipe mention Klopp’s side and Real Madrid as they are the two clubs who want to acquire the player’s services. 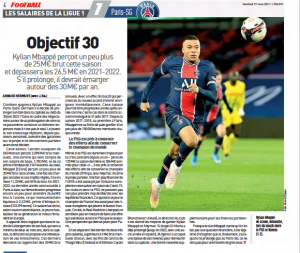 Liverpool owners FSG and the La Liga giants, however, ‘do not seem able’ to make an offer that can convince both Mbappe and his club. This should play in PSG’s favour as they continue their work to extend his contract beyond 2022.

The tide could go against PSG, if either Liverpool, Real Madrid or another club can table an offer that can convince Mbappe.