Van Dijk has established himself as one of the best, if not the best centre back in world football since joining Liverpool in a record £76.19m deal back in 2018.

He was a colossus for the Reds in their Champions League-winning season the following year and continued that last season, not missing a single minute of Premier League football as Liverpool secured their first title in 30 years.

Many believe that the giant Dutchman has redesigned the role of the modern centre-back, with his ease on the ball, ability to pass out from the back matched with defensive nous and the ability to put a foot, or head in, when the situation requires it.

For most, he is the complete defender, with many likening him to the best around, including Beckenbauer, who is often held up as the perfect example of a centre back.

And it seems the German legend isn’t against the comparison in the slightest, revealing his love for Van Dijk in a recent interview with France Football.

“The role of libero as I held it no longer exists nowadays,” he told the magazine.

“But with his way and style of playing football, Virgil van Dijk really impresses me. 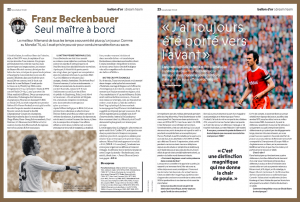 “I started to notice him at Liverpool and in the Dutch national team. He has this power and ability in him that are quite impressive.

“He shows it on all levels. I don’t see any weaknesses in him.

“At first glance, because of his stature, you might think he lacks speed and agility, but that’s not the case at all.

“He is very manoeuvrable and can anticipate situations very well. I love this player.”