Kai Havertz was promoted to Bayer Leverkusen’s first team in October 2016 and a year later, he emerged as a target for Liverpool.

The Reds were keen on adding the 19-year-old to their squad earlier in January after Football Whispers’ November 2017 report claimed the attacking midfielder made a trip to Melwood, where he was greeted by Jurgen Klopp, Steven Gerrard and Philippe Coutinho.

Fast forward to December 2018 and Sport Bild now claims the Reds are still chasing him and their scouts have watched him in action for the Bundesliga club for several months.

In addition to this, the Merseyside club are also in contact with the player’s agent.

When the teenager signed a new five-year deal last summer, Havertz made it clear that he would leave the German club if they fail to qualify for the continental competition and the report mentions Leverkusen are demanding €80m to sanction the sale of the young star.

Liverpool manager Jurgen Klopp has helped his current side sign Joel Matip, Ragnar Klavan and Naby Keita from Bundesliga clubs in the past.

Havertz has showcased his abilities after scoring seven goals and registering six assists in all competitions this season. 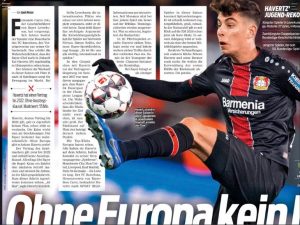 It should be seen whether Klopp’s German connections coupled with Liverpool’s long-term interest can help them beat the competition from other clubs to sign the starlet.