After rejecting a chance to take charge of Reading, manager Luís Castro is now being seen as a hero at his club Vitória Guimarães.

Portuguese newspaper O Jogo brings a story today explaining the ‘unexpected’ response to the Championship job, and what motivated Castro to do so.

It’s claimed that the manager didn’t want to leave Vitória ‘with a conflict’, and agreed to stay after having a chat with president Júlio Mendes.

Vitória had political issues earlier this year, and things were getting better with Castro in charge this season, as the club is having a good league campaign and will probably fight for an Europa League spot. 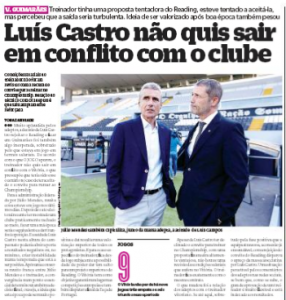 Confident that things will continue this way, Castro rejected Reading thinking that he may be even more valued until the end of the season, which could mean a chance to be called by a bigger club in the next summer.

O Jogo claims that Reading’s financial offer was indeed pretty good, and even so, the manager isn’t getting an increase at Vitória. Things will stay the same, with Castro confident that something good will happen at the end of the season.