After Jordi Alba committed his future to Barcelona in February by signing a new five-year deal, the La Liga winners have stepped up their efforts to bring in a backup for the Spain international.

On March 26th, we covered a report from Sport, who explained that Alberto Moreno of Liverpool is in ‘pole position’ after the left-back was presented with the ‘magnificent opportunity’.

In today’s edition of the same newspaper, they once again say Moreno’s name has ‘sounded’ at Barca.

It’s claimed the Catalan club are looking to bring in an experienced defender who is available on a free transfer at the end of the season.

Moreno’s current deal at Anfield will expire in the summer and having played in La Liga and the Premier League, he fits the profile that Barcelona are looking for. 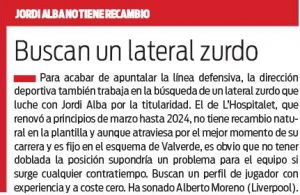 In the first half of the season, there were talks of a return to Sevilla for Moreno, but in recent weeks, the Reds player has been more linked to Barcelona.