Real Madrid have been credited with an interest in the forward and on Tuesday, Sport reported the Reds will ‘rival’ Los Blancos to land the 22-year-old.

Basketball star LeBron James is a part-owner of the Merseyside club and he ‘stands between’ the La Liga winners and France international, according to AS.

James used the World Cup winner’s photo as his profile picture on social networking site and Mbappé swapped his photo with that of the Los Angeles Lakers star on his official Instagram account.

The newspaper states this was done as a part of a Nike advertising campaign. It’s also explained the two athletes have met on several occasions and share a good relationship.

In addition to this, Nike are also kit sponsors of the Premier League winners, and AS add this ‘would make it easier’ for the Merseyside club, in terms of the economic operation, to sign the PSG star.

Mbappé’s contract lasts until 2022, but he if he decides against signing an extension, the 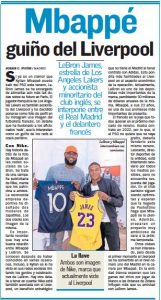 Ligue 1 side will look to sell him in the summer.

PSG are optimistic and believe Mauricio Pochettino’s appointment will make the player think about extending his stay in Paris.

There are multiple clubs interested in the attacker, but from the ‘first moment’ Liverpool have been Real Madrid’s ‘number one rival’ in the chase for Mbappé.

Those in charge at the Santiago Bernabéu hope the former AS Monaco man’s ‘desire’ to play under Zinedine Zidane will influence ‘more than his friendship’ with James.