Adrien Rabiot is increasingly outside of PSG.

L’Equipe have an article on the player’s future today, and how this week has made it clear a transfer is nailed on.

PSG have themselves spoken out and said an exit will happen, and Rabiot’s mother, who also acts as his agent, has made it clear relationships have broken down and it will lead to a transfer.

The French newspaper say claims of an agreement with Barcelona are untrue, something which has also been pushed by the Catalan media. ‘Several meetings’ have been held with the leaders of Liverpool, and Tottenham are ‘also’ interested, with Juventus expected to see their interest rise.

L’Equipe are clearly pushing Liverpool interest more than that of Spurs today. 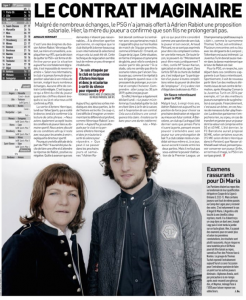 Interestingly, it’s explained that despite all the drama, PSG haven’t actually made a renewal offer.

The player’s contract expires in June and he hasn’t had a new deal since 2014, so has wanted big wages.

PSG haven’t presented any offer, and L’Equipe believe it’s a strange way of going about the negotiations.