Former Liverpool midfielder Xabi Alonso has told the Spanish media he completely fell for the club during his time at Anfield. The Bayern Munich star spent five seasons on Merseyside before leaving for Real Madrid.

Speaking to Marca, Alonso was asked about his experience at Liverpool following his move from Real Sociedad in 2004.

The former Spain international said as soon as he arrived he loved the club because there something different about Liverpool. Alonso thinks this was also the case playing in the Premier League because it was a competition he enjoyed, and even though he left Liverpool eight years ago he still has an affection for the club.

“Liverpool has a mystique, a history, a charm that everyone who loves football gets hooked on. It hooked me. I was hooked with Anfield, I was hooked with the Premier, also because I made the effort and also because things went very well. The first year we won the Champions League! Then I was hooked and once you get hooked on Liverpool we all stay hooked for life, all of us who have lived it intensely,” said Alonso. 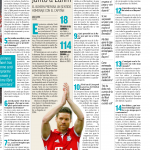 Alonso will be best remembered for his role in Liverpool winning the Champions League in 2005 when the Spaniard scored to level the match with AC Milan, when everything had looked lost. The 35-year-old also lifted the FA Cup during his time at Liverpool before his return to Spain in 2009.

Alonso will retire a the end of the season after eighteen years in the game.