After enduring a mixed season with Atlético Madrid and having been left out of Spain’s squad for Euro 2020, Saúl Ñíguez is looking for a way out of Wanda Metropolitano.

Juventus and Manchester United have been credited with interest, but haven’t taken the steps to carry out the midfielder’s signing.

Liverpool are now credited with an interest and the Reds wanting the 26-year-old is detailed in Monday’s edition of Mundo Deportivo.

Saúl has been identified as a target and the newspaper states the Merseyside club have ‘entered very strongly’ to sign the Spaniard.

The Reds are in the market for a new midfielder after seeing Georginio Wijnaldum leave Anfield as a free agent and join Paris Saint-Germain.

For this reason, Jürgen Klopp’s side were willing to make an effort to take the player and their initial offer of €40m was turned down by the La Liga winners.

If the English club’s offer had reached €50m, Diego Simeone’s man could have packed his bags, as long as he reached an agreement with Liverpool.

There’s a ‘brake’ to take Saúl to the Premier League side now that Barcelona have entered the scene. 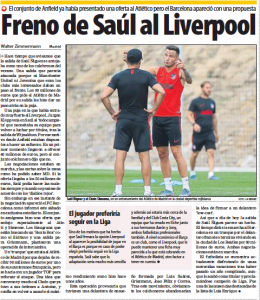 It’s claimed Barca have made a ‘barter’ proposal involving the midfielder and Antoine Griezmann, and this has ‘especially seduced’ Atlético since they will receive a quality attacker in return.

Mundo state ‘negotiations are underway’ with both Barca and Liverpool.