Portugal couldn’t repeat their heroics of 2016 this year, and went out of Euro 2020 at the first knockout stage.

Despite that, a few of their players impressed during the tournament and that’s encouraged transfer rumours.

One of those players is Renato Sanches, who has already been linked with Arsenal, and now Liverpool have been pulled into the picture. Saturday’s edition of L’Equipe reports the Gunners and Reds are both ‘very interested’ in the player, after his performances ‘aroused interest’ from elsewhere.

The French newspaper say Sanches ‘could join’ Liverpool or Arsenal, and apart from stating the interest that’s all they have to say on the matter. It’s merely a sentence at the end of a bigger report on the Ligue 1 club.

Lille are in the process of selling players this summer so a move would be possible, although there’s no asking price mentioned by the report. 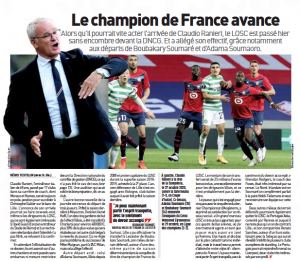 At this stage the claims are pretty thin and seemingly weak, and it’s best to wait to see how and if further reports develop the situation before taking this one too seriously.