West Ham forward Felipe Anderson is hoping for a return to former club Lazio to be sealed by the 10th of July as he closes in on a move to his former club.

That’s according to Corriere Dello Sport, who say the Italian side are working on getting their former star back from West Ham this summer.

The newspaper explains that new Lazio boss Maurizio Sarri is a big fan of Anderson’s; in fact, he has ‘always been in love with the Brazilian’, and so Igli Tare is working to bring him back.

Anderson has recently returned to West Ham after an unsuccessful loan spell at Porto, but everyone involved knows he is simply ‘passing through’.

He will use the time in England to speak those in charge at West Ham and push for a return to Rome, with Lazio the only option as far as he is concerned.

West Ham are happy to oblige and want to sell immediately as the forward’s deal expires next summer, and they’re set to lose out otherwise.

They would prefer to recover ‘a small amount’ of the €31m they paid for him, and at the minute, that figure stands at around €7m.

Lazio chief Claudio Lotito has ‘negotiated from the bottom up’ in this regard, knowing that a loan deal is pretty much off the table because of Anderson’s contract situation. 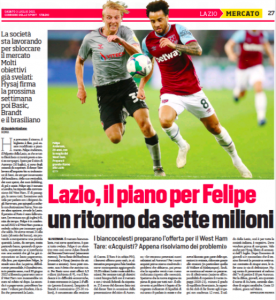 Such a move would see West Ham miss out now and in future, so it’s unlikely to happen, and so €7m ‘could be enough to close’ a permanent deal. It’s the figure Lazio are planning to offer either way.

Anderson is hoping it will be accepted and a deal done quickly, with him aiming to be part of Lazio’s squad when they go on their pre-season retreat to Auronzo on July 10th.

That may be a little ambitious at this point, though, with West Ham still needing to be convinced on the price, despite their willingness to sell.