Even before this season started it was thought Nicolas Pepe would be spending his last campaign at Lille.

The 23 year old is perfectly primed for a transfer and has been linked with a growing list of potential clubs, and has a price which seemingly grows by the week.

Recently, an offer from Inter Milan has been mentioned in France. That’s been reported as both €60m and €70m, on Friday L’Equipe say that bid is official, written, and the suggestion is it isn’t going to be the highest.

Liverpool are linked by the French newspaper, and it’s not the first time Jurgen Klopp’s side have been pulled into the equation.

L’Equipe say Liverpool ‘intend to position themselves’ for the potential signing, with them being expected to do that in the coming weeks.

There’s no clear explanation as to what that means, whether it’s a case of the Anfield club making an offer or speaking to the player’s entourage. 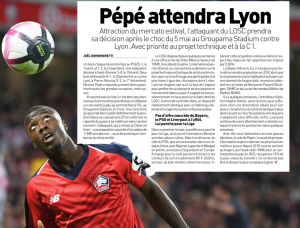 Bayern Munich and PSG are also interested, but there’s no action from them yet.

Perhaps Liverpool shouldn’t worry too much about the reported Inter offer. It seems a little high for them, especially without sales, and would almost certainly be conditional on the Italian club bringing in big money first.