Kai Havertz is a name Liverpool fans will likely hear more about over the next few months.

The Bayer Leverkusen youngster is considered one of the best talents in the Bundesliga, and at just 20 years of age has increasing backing in Germany to play an important role with the national team.

Liverpool will be linked regardless of whether there’s any genuine interest. The Jurgen Klopp factor means the Reds are pushed forward for almost any exciting Bundesliga player, and that the club are Europeans Champions, and one of the continents top sides right now, means they’re considered to be in the mix for the biggest signings.

This week’s edition of SportBild has Liverpool in the ‘fight’ to sign the player, with a transfer thought likely next summer.

It’s stated: ‘For which club Havertz decides is open. All the top clubs in Europe are interested. Whether the reigning Champions League winner Liverpool, Juventus or Paris St-Germain – the big ones fight for the technician with the fine left foot. Bayern, FC Barcelona and Real Madrid currently have the best chances.’ 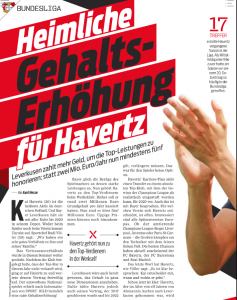 Bayer Leverkusen are expecting a transfer fee in excess of €100m, and it’s pointed out Havertz has more experience than Joao Felix, who moved to Atletico Madrid in the summer window for around €120m.

Liverpool may be being pulled in for added drama, and there’s been no big push in the Spanish media for either of their two big clubs.

Either way, the German media are warming this mega transfer up, having covered it last week as well.