Finding young talents around Europe to nurture them and then sell them to the highest bidder, RB Salzburg have a healthy financial setup in Austria, and this summer is likely to see them cash in once more.

Already seeing money come in from the likes of Erling Haaland and Patson Daka over the past couple of years, the Admiral Bundesliga side are now expected to wave goodbye to Karim Adeyemi sooner rather than later, with Liverpool among the interested parties.

Multiple stories have suggested the Reds are tracking the young German forward ahead of next summer, with Jürgen Klopp seemingly keen to freshen up his attack.

With Adeyemi capable of playing across the front three, he would certainly fit right into the Anfield system, potentially providing, at first, much needed rests for the likes of Mohamed Salah and Sadio Mané, or even Roberto Firmino, throughout a busy season.

However, Liverpool aren’t the only ones, as Bayern Munich, Borussia Dortmund and RB Leipzig are all also on the hunt, and a return to Germany is widely seen as the likeliest outcome. 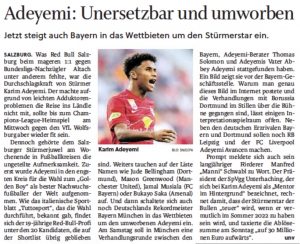 That being said, the Reds will have many good arguments in their favour, some of which could be financial, and that’s why Salzburger Nachrichten believe the Reds ‘should make advances’ for the player in the near future.

We’ll have to wait and see, but with Adeyemi’s agent, Thomas Solomon, and his father Abbey Adeyemi recently posting a picture in front of the Bayern Munich office, Liverpool better act quickly.

“We investigate everything” – Manager hints at potential January deal for...