The hot potato of signing Erling Haaland is something Manchester City, Barcelona and Real Madrid have been passing between themselves for a number of weeks.

It would appear no club wants to be held aloft as the favourite, so sources close to each are pushing one of the others ahead.

Despite having a release clause of around €75m at Borussia Dortmund, Haaland will be a hugely expensive signing. That’s down to the level of wages he’ll be looking for, and the commissions Mino Raiola, and reportedly the player’s father, will be seeking to get from the deal.

Given all of that, Liverpool haven’t really been linked. It’s not that the Reds are a poor club, but more so that committing to that kind of deal would be a complete change in plan for Jurgen Klopp’s side.

Whilst they have invested big in signings, this would be another thing entirely. 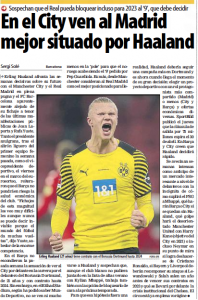 Mundo Deportivo suggest Liverpool could consider Haaland should they lose Mohamed Salah this summer. The Egyptian star’s renewal talks aren’t going swimmingly, and without a deal an exit would be possible.

However, Haaland will almost certainly be looking for more in wages than Salah. So for Liverpool to move forward with any possible interest in the Norwegian would see them pay more initially, although they’d have the chance of making a future profit from the 21-year-old.

Still, it’s worth making it clear this is just at the idea stage.