Liverpool director of football Michael Edwards is the ‘hot candidate’ to take up the job at German side RB Leipzig.

That’s according to SportBILD, who say he could take up his new role with the Bundesliga side as early as January.

Edwards has earned himself a reputation as one of the best in the business during his time with Liverpool, where he has overseen a massive change in the squad under Jurgen Klopp.

Alongside superb signings such as Mohamed Salah, Sadio Mane, Alisson and Virgil van Dijk there has also been a strong run of player sales, with Edwards securing big fees for players Liverpool don’t want, such as Dominic Solanke and Christian Benteke.

That’s allowed Liverpool to compete at the top of the game with a budget that is nowhere near their main rivals, something they and Edwards are very proud of.

It makes him a hot commodity, and when they announced in August he was set to leave Anfield, attention turned to where he’d go next.

Real Madrid had been speculated as one option, but it is Leipzig where he could end up next, say SportBILD.

According to their information, Edwards is the ‘hot candidate’ for the position, with the club having been on the hunt for a new sporting director since May.

They have not ‘set their sights’ on Edwards, and he is ‘even expected’ to start in his new role as early as January. 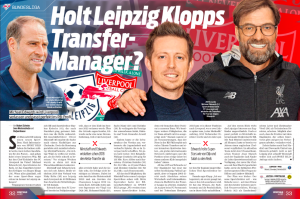 Oliver Mintzlaff has been searching for a candidate for a while and has now settled on Edwards, who is the ‘desired candidate’. Indeed, talks ‘became more concrete’ a few weeks ago.

Mintzlaff and Edwards have known each other for years after they worked on Naby Keita’s move to Liverpool in 2018, and there is a relationship to be built on as a result.

At first, the appointment seems strange but hiring Edwards fits into Mintzlaff’s ‘international mindset’ for Leipzig, who already have a core of English speakers working at various levels at the club.

Things are now seemingly progressing, and there is a chance that RB Leipzig could step things up amid interest from elsewhere, although that is something Mintzlaff has refused to comment on.