Used just five times by Jürgen Klopp this season and with his contract running out in the summer, it’s fair to say that Alberto Moreno’s time at Liverpool is all but over.

The Spaniard, bought for just over £16m back in 2014, never survived the arrival of Andrew Robertson, and has since had to make do with whatever scraps his manager has fed him.

However, despite his lack of game time, the 26-year-old should end up having a good amount of choice in the summer when it comes to his next club, with some rather prestigious names appearing in the media.

January saw Marseille in France touted as a potential landing spot, as a free transfer for a Spain international would be right up their street, but the most recent, and perhaps surprising, story sees Barcelona reportedly eyeing up the former Sevilla man for a summer move. 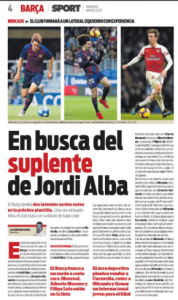 Sport on Friday explain that now Jordi Alba has been tied down for the next five years, the La Liga champions are looking at finding someone who can be a rotation option for the 29-year-old.

Moreno, who was excellent during his Sevilla days, would be a cheap yet experienced option, and an ideal candidate for the two-year contract Barcelona want to hand the lucky winner until they find Alba’s long-term replacement.

For the Liverpool man, it would be a chance to showcase his ability in a league he knows very well, perhaps then earning him a move to another club where he can become a first-team regular.

There’s worse places to end up.