Home Europe Liverpool ‘could make an offer’ for player, club looking to offload this...
SHARE

Philippe Coutinho’s agent recently explained Barcelona have informed him they have no plans to sell his client this summer.

Thursday’s edition of Mundo Deportivo claims even though the La Liga winners’ public stance is the Brazil international is not for sale, internally they plan to use him as a bargaining chip to sign Neymar, meaning they are open to his sale.

If the 27-year-old has to leave the Camp Nou, his priority is to return to the Premier League, where Liverpool are attentive to his situation.

The Reds are an option and the report explains they ‘could make an offer’ to bring him back to Anfield.

Ernesto Valverde’s side paid €120m plus €40m in variables to the Merseyside club for the South American in January 2018.

Should Jurgen Klopp’s side decide to make a proposal for him, it will be nowhere close to the figures they received more than 18 months ago.

Barcelona are linked with Neymar and Antoine Griezmann and if both of them arrive at the club, there will be no place for Coutinho in the starting XI. 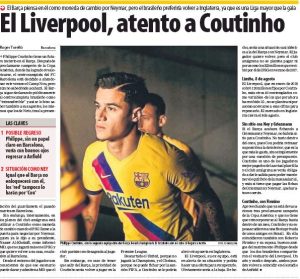 He is also one of their top earners, meaning they will have to balance the books by getting rid of Coutinho.

With Barca looking to offload Coutinho, it remains to be seen whether or not Liverpool will make an offer for him.