Liverpool are yet to make a bid for Real Betis defender Aïssa Mandi, despite numerous claims to the contrary.

That’s what ABC Sevilla report today, covering claims that Liverpool had identified the Betis defender as an ideal replacement for Dejan Lovren.

The Croatian defender joined Zenit St Petersburg last week, leaving the Premier League champions with a gap to fill in their centre back options.

Mandi appeared to be the man they were eyeing up, with COPE reporting they had made a €10m bid and Betis were open to selling at that price despite him having a €30m release clause in his contract.

ABC dispute that today, though, stating Betis ‘have not received to date any formal proposal’ for Mandi and there is no negotiation underway for his departure at this present time.

While there has been ‘a lot of noise’ about a potential deal with Liverpool, this has not turned into a ‘concrete’ move just yet.

Despite that, Mandi is a problem the club need to resolve this summer given his contract expires next year.

The club have tried to extend his current deal, but talks broke down when the player, who was dealing with it himself, deemed their offer as ‘insufficient’.

Mandi has maintained his stance, continuing to refuse Betis’ efforts and has now appointed new agents to deal with his future.

Amid all this, the club have been approached by ‘agents and intermediaries’ who want Betis to accept a deal between €13-15m for him, far from the €30m release clause in his deal. 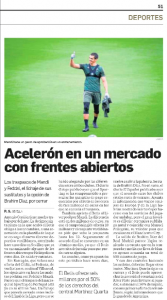 That is seemingly what Liverpool would have to offer, although Diario de Sevilla argue otherwise.

They insist the Reds have made a €10m bid for Mandi, but Betis told them they wanted €12m, so that €2m is the difference at the minute.

Their belief is an agreement can be found ‘probably in the middle’, particularly as Betis need to sell before they can bring players in.

Either way, it seems if Liverpool are genuinely interested, then they could get themselves a cheap replacement for Lovren this summer without spending much more than what they sold him for.

Everton ‘take lead’ for defender – ‘Hold the rope’ for transfer, ‘fighting’ with competition

Everton ‘take lead’ for defender – ‘Hold the rope’ for transfer,...