As you might have seen over the past few days, Wesley Hoedt is on his way out from Southampton.

This will come as a great sigh of relief for Ralph Hasenhüttl, who didn’t seem prepared to play the Dutchman at any point this season following loan spells with Celta Vigo and Royal Antwerp, and a return to Lazio is the likeliest outcome.

That’s according to both Corriere dello Sport and Il Tempo, who have reports on the situation.

Starting with the former of the two, who explain the inability to sell either Bastos or Wallace is ‘blocking the arrival of Hoedt’, who has been ‘chosen by Simone Inzaghi to complete the defence’.

Currently ‘out of Southampton’s plans’, the former Lazio man can be attained ‘on loan (perhaps costing €1m) with a right of redemption set at around €8m’.

As was pointed out on Monday, Claudio Lotito, the Serie A side’s manager, doesn’t want an obligation to buy, having sold Hoedt for €17m in the past and ‘he will not buy him back even for half’.

The player’s return is only there for him to ‘relaunch’ his career, and the rest will be sorted out at a later date. 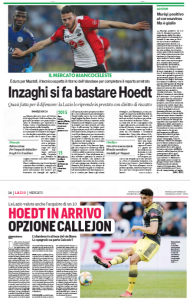 As things stand, Hoedt is waiting for the green light before arriving in Rome, which should happen either way ‘barring a sensational turnaround’.

Il Tempo corroborate a lot of this, saying ‘very little is missing’ for the Southampton player to return to his former club, and the two sides are currently ‘working on the formula’.

The Saints are reportedly wanting to accommodate their defender’s wishes, and Lazio are ‘pushing to close with the formula of a loan with a view to buy fixed between €8-9m’.

Lazio’s intermediaries are reportedly ‘in London to polish the final details’, all the while trying to find out Arsenal’s demands for Shkodran Mustafi.

However, the arrival of Hoedt would see them move on from the German.