Following two spells away from Southampton on loan, first with Celta Vigo in La Liga and then Antwerp in Belgium, Wesley Hoedt has no future at St Mary’s.

Ralph Hasenhüttl has made that very clear by not selecting him in either of the two Premier League games to start the season, and a surprise return to Lazio, whom the Saints bought him off for €17m back in 2017, is now being touted.

That’s according to Corriere dello Sport, who have an update on their article from Sunday, explaining the Dutchman has ‘asked to return and got [Simone] Inzaghi’s OK after a telephone call’.

Now, both manager and player are waiting for the green light from Lazio themselves, as it all depends on ‘Southampton’s requests’.

As things stand, those are €8m, which Corriere believe is not a ‘credible’ amount to repay after they collected €17m for him in the first place, and the likelier option would be some kind of loan. 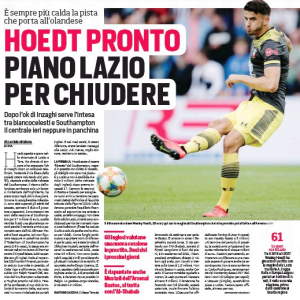 They state Hoedt ‘hopes to be freed’ from Southampton, with a temporary deal with a ‘right of redemption’ suggested, since Claudio Lotito, Lazio’s owner, has ‘never liked obligations’.

Before such an amount could be paid this year, the exits of Bastos and Felipe Caicedo would be needed.

Either way, the option to loan him back out is being ‘considered’ by Southampton, and the next few days are said to be ‘decisive’.