Jose Mourinho will almost certainly spend big once again this summer at Manchester United. A very disappointing first season for Mourinho can be somewhat saved next week against Ajax, but a much stronger Premier League challenge will be expected during the next campaign.

It’s not just the first team Manchester United are looking to improve, conscious they’re in danger of slipping behind Manchester City in the recruitment of young talent. Mourinho has continued Manchester United’s revamp of the scouting department, and claims from Spain on Friday say the club have already agreed a deal for Espanyol’s young midfielder Arnau Puigmal.

Puigmal isn’t the only young talent subject to a serious approach from Manchester United recently, report L’Equipe. The French newspaper say the club ‘have made a firm 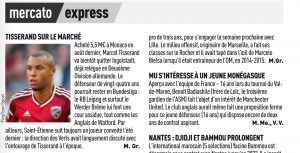 The 16 year old defender has two years left of contract at Monaco, with the rules for youth contracts being different from country to country. Badiashile has wider ties to Monaco, his 19 year old brother Loïc is the club’s third choice goalkeeper.

Monaco’s club structure isn’t geared to seeing players go before they’re worth tens of millions, so they’ll likely put up a fight against Manchester United’s advances.