Antonio Conte has a plan, report L’Equipe on Saturday, and that plan is to sign Tiemoue Bakayoko and play him next to N’Golo Kante… and see Chelsea rule the world.

Both Manchester clubs are interested, along with Bayern Munich and Juventus, but L’Equipe believe Chelsea have edged out in front of the competition. Their progress is said to be ‘very advanaced’ but that sounds like them getting their house together over a possible move, rather than being on the verge of signing Bakayoko.

Chelsea were interested in Bakayoko was he was a teenager, but the midfielder wasn’t keen enough to sign, and that has proven to be the right decision. Now 22 years of age and a full international, Bakayoko would be going to Chelsea in a position of strength. 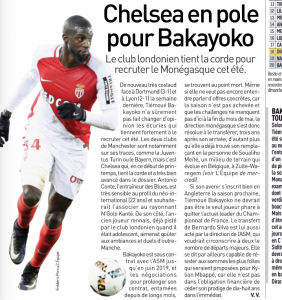 AS Monaco have so far received no concrete offers for the player, although that’s expected to change before the end of May. There’s no shortage of interested clubs, so Chelsea will need to work quickly.

The French principality club are already planning for life without Bakayoko, looking to sign Soualiho Meïté, who plays for Zulte Waregem in Belgium.