We’ve lost count of how many times the Portuguese press have claimed William Carvalho will be leaving Sporting CP at the end of this season. Most of the local newspapers keep reporting it, as it seems the player is looking to take the next step.

It’s O Jogo’s turn, and they say Sporting are prepared to sell the player, with West Brom once again linked. 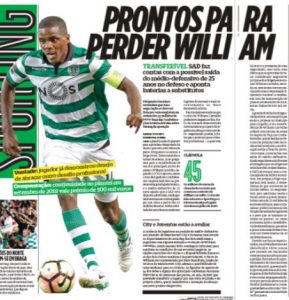 The list of interested sides is mainly from England. Arsenal and West Brom are linked for approaches made in the past, the Baggies being most recent, and Manchester City and Juventus are said to have been scouting the player.

Carvalho has a €45m release clause, but it’s said €35m is the price demanded by Sporting for now. Last summer, it was claimed West Brom offered €30m.

Despite the player’s long time interest in moving to England, no contacts from Premier League clubs are mentioned since January.