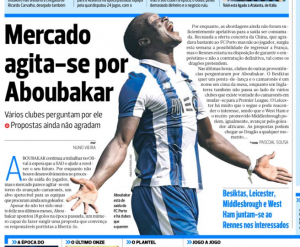 Leicester City, West Ham and Middlesbrough are all said to be interested in Vincent Aboubakar from Porto.

The player, who’s expected to leave before the end of August, is analysing all the offers, as he and Porto decide the best way to go.

The English sides are still to make their bids, and A Bola says the Foxes have been following the player for a long time and could reawaken their interest. The Hammers and Boro “could advance” for the striker soon.

These are only possibilities mentioned alongside Besiktas and Rennes. The French club are said to be closer to landing the player on a loan deal with an option to buy.

Despite having scored 18 goals during the season, Aboubakar’s last months for Porto weren’t very good. That’s why the club signed reinforcements for the attack and now the Cameroon striker is no longer needed.

No values are mentioned in A Bola’s article, though. According to Transfermarkt, his current market price is €10.5m.