In news that will shock absolutely no one after the recent reports coming out of Italy, it seems like Grégoire Defrel is about to say no to a move to the Premier League.

Spending all of his career in between Serie A and Serie B, the French striker was heavily linked with a move to Leicester City, while vague mentions of an interest from Marco Silva at Watford did the rounds recently.

Well, according to Gazzetta dello Sport on Friday, Monchi, Roma’s new director of football, has taken it upon himself to speed things up in his side’s bid to bring the player to the Italian capital, with a complex deal involving €18m and two players.

Down the player’s end, despite the interest from the Foxes and the Hornets, the 26-year-old is apparently pushing for a move to 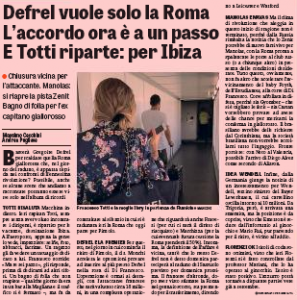 the Serie A runners-up, who will be playing Champions League football next season.

Unfortunately for both Leicester and Watford, Gazzetta seem to think Defrel has already said no to the Premier League duo, leaving little room for some kind of hijacking from either Craig Shakespeare or Marco Silva.

At least, until further notice.