Leonardo Ulloa has been speaking to Marca ahead of Leicester City’s Champions League matches against Atletico Madrid. The Argentine striker hasn’t had the prominence he would like at Leicester this season, and wanted to leave during the January transfer window.

Ulloa had also considered an exit in the summer, and has claimed he could have joined West Brom or Swansea City during that window. The 30 year told believes previous manager Claudio Ranieri wasn’t straight with him, and kept him at the club under false pretences: “When I was able to go to Swansea or West Brom in the summer he told me that he was going to stay with only four forwards… and the last day of the market brought another.

“I have worked and tried to always be prepared, but the minutes did not arrive… as I already knew. That bothered me a lot.”

Having been kept back from joining West Brom or Swansea, Ulloa told Marca that he was 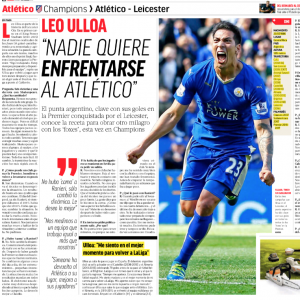 “less and less” part of Ranieri’s plans, before the Italian was dismissed from his post.

Now playing for Craig Shakespeare, Ulloa will hope to get some chances before the end of the season, and it’s quite possible he could then leave Leicester.

With only a year of contract remaining, Ulloa and Leicester will have to make a decision soon, whether West Brom and Swansea remain interested is unknown.