L’Equipe have reported Anderlecht youngster Youri Tielemans will be ‘spoilt for choice’ when it comes to leaving the Belgian side.

The midfielder is expected to move in the summer window, and the French newspaper say Everton, Liverpool and Chelsea are all keen. Tielemans has been monitored by several clubs around Europe since he made his debut for Anderlecht, and a big move is likely to happen soon for the 19-year-old.

The Belgium international has been continually linked with a move to the Premier League, but L’Equipe believe AS Monaco could be pushing ahead. Monaco have shown how well they can develop young players and that could be a temptation for Tielemans.

The French principality club will face competition from Everton, Liverpool, and Chelsea, and it’s thought a fee in the region of €25m would be required. 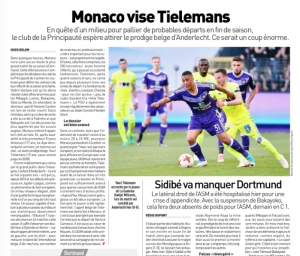 Everton are the most strongly linked to Tielemans of the English trio, but that has often been through assumption. More than once it’s been reported in Belgium that Everton would be the ideal type of club for Tielemans to join.

Chelsea could be Premier League champions, and Liverpool are well placed to qualify for the Champions League, but Everton has been suggested as a perfect next club for Tielemans.

AS Monaco want to take the Premier League chance away.