It appears that Inter, having already signed the likes of Christian Eriksen and Romelu Lukaku from the Premier League over the past year, will continue to shop in England for the foreseeable future.

Whether they manage to get any of their targets remains to be seen, with N’Golo Kanté top of their list to bolster their midfield, as Conte sets his sights on the Serie A trophy for next season.

However, there’s always a need for backup options, and Corriere dello Sport believe that Leicester City’s Wilfried Ndidi is one of them.

The Nigeria international has been in fine form under Brendan Rodgers and is widely seen as one of the best defensive midfielders in the league, leading him to being linked with, and this is no slight on the Foxes, bigger clubs. 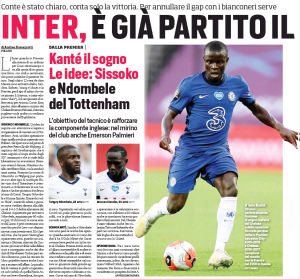 Corriere state that ‘among the names being monitored’ on the other side of the Channel is that of Ndidi, considered an ‘interesting profile’ by those in charge should their attempts for Kanté, and some other names such as Tanguy Ndombélé or Moussa Sissoko, fail to pan out.

The Leicester man is seen as a ‘prospect for Serie A’ due to his ‘strength and dynamism’ in midfield, as those are the attributes Conte is looking for going forward from whoever ends up sitting in front of his defence.

There’s no mention of price or hint Inter will make a move anytime soon, but it’s worth keeping in mind that Ndidi is on said list, and Leicester, who won’t be in the Champions League next season, could end up with a tough task on their hands when it comes to keeping hold of him if clubs playing in the European competition come knocking.