Are you French? Do have a connection to English football and some experience of ever coming up against Manchester United at Old Trafford?

If you can answer yes to both of those questions and haven’t been asked about Ole Gunnar Solskjær’s side coming up against PSG in the Champions League then you need to get a new publicist.

All over the French media there’s interviews, opinions shared, insight delivered, and Claude Puel has got in on the act.

The Leicester City manager was asked by L’Equipe to pick a best eleven using players available from both United and PSG. It’s a task which will often bring ridicule, criticism and annoyance, but Puel threw himself in regardless.

Manchester United players make up seven of the team, and Puel has explained his choices. It’s also stated that had Neymar, Edinson Cavani and Adrien Rabiot been available to Thomas Tuchel, then all three would have been included.

David de Gea gets the nod over Gianluigi Buffon because of his ‘youth’. Ashley Young, a converted winger, is chosen at right back because Puel feels Thilo Kehrer is more a central defender, and the Foxes boss favours someone specialised for the role.

Juan Bernat loses out to Luke Shaw at left back. 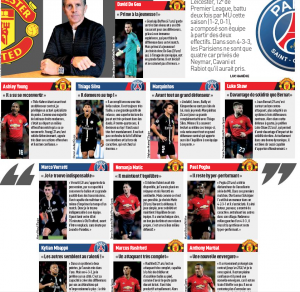 Marco Verratti has to have a place, with Puel calling him ‘indispensable’.

Nemanja Matic is only in because Tuchel isn’t allowed to pick Rabiot, otherwise the Leicester manager would have placed Verratti as a holder and had the French midfielder in his place.

The inclusion of ‘hyper-efficient’ Paul Pogba goes without saying, and that’s the same for Kylian Mbappe

Marcus Rashford is a ‘very complete attacker’ and Anthony Martial is ‘full of confidence’.