Since January, the rumours surrounding Napoli’s Faouzi Ghoulam have increased quite considerably, with the Serie A club reportedly happy to sell the Algeria international in the upcoming transfer window.

A lot of Premier League clubs have been linked, but now Napoli appear to be happy to renew him, with a three-year extension apparently on the table. 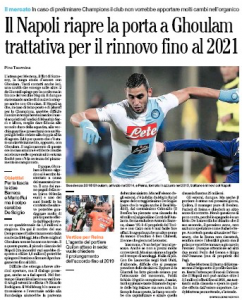 However, Ghoulam isn’t forced to accept it, and if he finds another challenge abroad, could very well take it, which leaves the Italian side needing a replacement, and this is where Ben Chilwell comes in.

Yes, according to Il Mattino, the young Leicester left-back is one of the many players Napoli are looking at to replace Faouzi Ghoulam in their defence.

The 20-year-old has been a bit part player at the King Power Stadium this season, playing second fiddle to Christian Fuchs for most of it, and has only racked up nine Premier League appearances.

However, with the Austria international now in his early 30s, Chilwell is next in line for the role, meaning Leicester probably aren’t all that interested in letting him go in the summer.

This is the first we’ve seen of this rumour, and we’ll see if it actually turns into something, or if it’s just Il Mattino throwing a name around because he’s young and talented.