Leicester City defender Wesley Fofana is planning ‘radio silence’ until next year after a ‘communication error’ after his move to the club.

The young French centre-back joined the Foxes in a big-money move from Saint Etienne in the summer, with the Foxes paying £31.5m for the highly-rated 19-year-old.

He’s made an instant impression at the club, regularly featuring under Brendan Rodgers and earning rave reviews for his performances.

That’s led L’Equipe to cover the player today, detailing his early career and the success he’s enjoying so far with Leicester.

They say that his ‘trajectory’ is more straightforward with the Foxes and that everything has gone ‘very fast’ for him so far.

They question if things have gone a little too fast, though, explaining that at the beginning of the month he committed a ‘small communication error’ by claiming he wanted to “bring England down” while a guest on Teléfoot.

That statement was ‘not well received’ in England, and so from now on, he will be exercising ‘radio silence’ until next year at least.

While it’s been all positive for Fofana at Leicester so far, there is one major concern, and that’s his physical condition.

L’Equipe explain that having ‘been in chains’ at his former club for a month he is now suffering physical repercussions.

After the recent 1-0 defeat of Wolves, in which he was named man of the match, he left with a ‘big scare’. 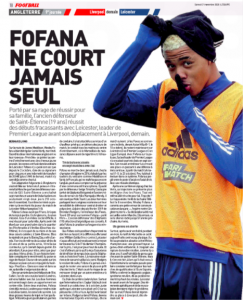 With his right knee inflamed, he feared a ‘rupture of the patellar tendon’, the same injury that he suffered two years ago.

The centre back was already suffering with his left knee before leaving St Etienne; something Leicester were aware of before they signed him.

Fortunately, though, an MRI scan at Clairefontaine last week confirmed the Foxes diagnosis of patellar syndrome, which they believe can be fixed with specific stretching and weight training so he can continue his flying start to life with the Foxes.