Home Europe Leicester City and Watford not willing to spend enough on winger, would...
SHARE

Portuguese newspaper Record today brings a front page story which states Sporting are demanding €45m for the transfer of Gonzalo Plata this summer.

This is mostly a message for German side RB Leipzig, who reportedly got in touch with the Lions to know the conditions for a move.

However, the outlet also points out that this new price tag should also protect him from the likes of Premier League sides Leicester City and Watford.

Record recalls the Foxes and Hornets had been interested in Plata not so long ago, and were considering offering £20m for the winger. Now they highlight the fact that it wouldn’t be anywhere near what is required. 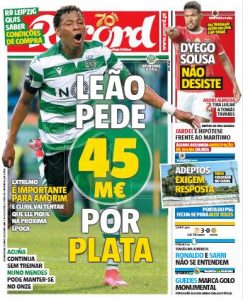 Plata only has two goals and one assist for Sporting this season, but the club trust his potential and are expecting him to ‘explode’ very soon.

The 19-year-old actually has a release clause of €60m in a contract which runs until 2024, so he’s very well protected by the Lions.