The idea that Inter could turn their attention to Gabriel Jesus this summer is growing in Italy.

What started out a simple idea appears to be turning into a full-on transfer story, as the Serie A club continue to plan for a possible ‘post-Lautaro Martínez’ scenario.

The Argentine could still leave in the coming months, and if he does, he’ll need replacing.

Names such as Pierre-Emerick Aubameyang and Andrea Belotti have been mentioned, but Corriere dello Sport seem to think Jesus is the better fit.

Already of interest to Inter back in 2016, the Brazilian eventually went to Manchester City as the Serie A side focused their attention on Gabriel Barbosa, but he’s never dropped off their radar.

Corriere point out that while this season has seen the 23-year-old play more than in previous years, Sergio Agüero remains the favoured striker at the Etihad (for good reason) and the rapport between Guardiola and Jesus ‘isn’t idyllic’. 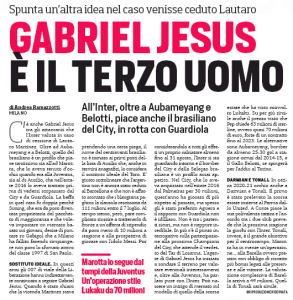 While he isn’t a guaranteed exit, the Brazil international is also not among the ‘unsellables’ in the north of England, with extra reason to look elsewhere if the Premier League side do end up missing out on the Champions League in the future.

It’s reported that his agent has spoken to both Inter and Juventus, and it’s not excluded that a ‘scheme’ like the one created to secure the services of Romelu Lukaku last summer could be created to get Jesus, as City’s demands stand at around £63m for the young forward.

It’s a lot of money, but if they do end up selling Martínez, they’ll have a few million to spare here and there.