A few Premier League clubs sent scouts to watch Braga play Moreirense in the first fixture of the Portuguese League this Sunday, according to newspaper O Jogo.

And after checking our records, we found that only one of those travelling sides have been linked to players from the clubs involved. That’s Leicester City.

Just a few months ago, the Foxes were said to be after Bruno Viana, who has received the nickname ‘Robocop’ for the good season he’s had at Braga.

Viana has featured in the 3-1 win over Moreirense this Sunday. He had a good performance while Braga were winning 3-0, but got some criticism for the away side’s late goal. 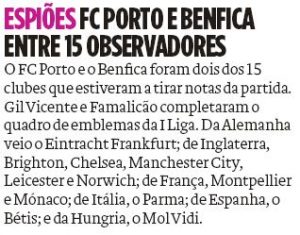 Viana is protected by a €15m release clause, and that was the priced demanded by Braga when the Foxes were linked to him at the end of last season.

Perhaps Leicester City will now scout him a little more, and focus on the 24 year old’s development.