Leicester City are reportedly set to make another attempt to sign Adrien Silva from Sporting.

According to Jornal de Notícias on Saturday, the Foxes will be back for the player soon, this time with a €22m offer.

The newspaper claims that Inter Milan are also in for him and will offer €25m. The two clubs are joining West Brom, who JN claims are ‘very attentive’ to the player.

But none of these offers would be enough, JN says, especially Leicester’s. They claim Sporting are actually demanding €30m, so clubs will have to raise their bids, and Inter are most likely to do it.

There are two things that are worth pointing out about these claims. Firstly, Leicester City tried to sign Adrien for €30m last summer, 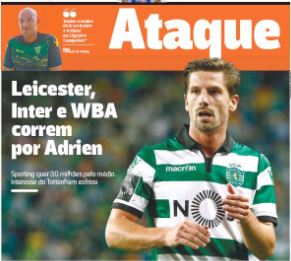 and the deal was blocked by Sporting because they wanted his €45m release clause. So by bidding €22m now, the Foxes are certainly aware the demands are different.

Secondly, the Portuguese media have been pointing out that West Brom have already made a €26m offer and it has been rejected by Sporting. So if true, Leicester will have to make a much improved bid, and hope the competition doesn’t beat them to it.

Arsenal player’s name is ‘on list’ of Euro giants for January...