A week ago we covered claims from France that Manchester United have made an ‘important offer’ to sign Hannibal Mejbri.

That offer was likely made to the player himself, with the 16 year old and his family in a legal dispute with AS Monaco.

They don’t believe there’s any legal legitimacy to a private agreement made with the French principality club over a contract, and therefore feel the youngster should be allowed to leave for free.

RMC really talked up Manchester United interest, with it being claimed they are ‘impatiently waiting for news’ having been in talks with Mejbri’s family for several months.

It wasn’t the first time the player has been linked with a move to Old Trafford.

Back in January it was also claimed the club had made an offer. 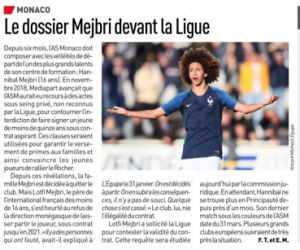 Thursday could be very important in deciding whether he can move to England or not.

L’Equipe report the contract situation will ‘be examined today by the Legal Committee’.

Mejbri hasn’t been in Monaco for almost a month and is awaiting the result of the process. Manchester United are likely eager to hear the outcome too.