While there might not be many ins and outs for the first team at Manchester United this January (except for Marouane Fellaini heading to China), the Red Devils are, however, still looking to bolster their youth teams.

Already expected to sign Noam Emeran from Amiens, Ole Gunnar Solskjaer’s new club are now trying to get a deal for Hannibal Mejbri over the line.

The 16-year-old, who is currently at Monaco, is said to want to leave the principality club, with Manchester United pushing the most out of all the interested suitors.

According to RMC Sport in France, the Premier League club have already made an offer and have been in talks for ‘several days’. 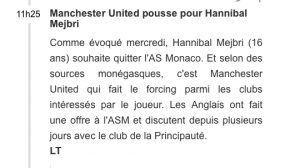 The midfielder already has five France U16 caps to his name, and would be the latest of a growing list of youngsters targeted by the Red Devils this January following the aforementioned Emeran and Adrian Corral from Villarreal.