Unless you kept tabs on Middlesbrough’s U21s between 2013 and 2014 or are an avid fan of Ligue 1 football these days, Birger Meling might have passed you buy.

The Norway international currently plays for Nîmes Olympique in France, and has been impressing with his performances since his arrival in 2020.

The man of the match in a 2-0 win over Bordeaux, the 26-year-old has had an odd trajectory in football, idolising a move to Liverpool when he was younger but with a father who drew inspiration from Manchester United legend Paul Scholes to get his son where he needed to be.

All of this is revealed in a portrait on the player by L’Equipe, who look at the left-back, who once needed to drop an age group due to his size in order to find happiness.

They explain that Meling used to ‘dream himself as the king of Anfield with the number 10 of his back, the same as his hero Michael Owen’.

However, measuring 1m40 and weighing just 36kg at the time, that seemed a difficult task.

That’s when his father turned to an Old Trafford icon for his muse, and ‘inspired by the example of Paul Scholes at Manchester United’, persuaded his son, ‘then 17, to ask to go down a level with the U16s to find himself’. 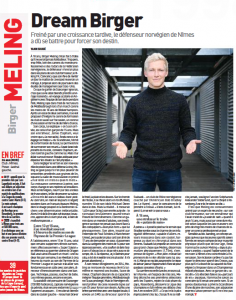 His father said: “He suffered to be faced with so many obstacles and lose time. His response, and I admire him for that, was to work even harder. He never gave up”.

Wanting to be a forward at the time, Meling eventually moved to left-back, and while he did have that year at Middlesbrough, he quickly returned to Norway, where he forged a path for himself at both Stabæk and Rosenborg.

Then came the bigger move to Nîmes, where he has developed even more as a late bloomer, and where, as we mentioned above, he finds himself a key member of this Ligue 1 side, scoring a goal in the 2-0 win over Bordeaux.

There’s more to come there, and while that move to Liverpool could be difficult to get with Andrew Robertson and Kostas Tsimikas currently in his role at Anfield, a move to the Premier League isn’t that unrealistic if someone in England likes what they see.