Usually, when we cover the French media’s take on Moise Kean it’s positive, but not this time.

The Everton player has been something of a revelation since moving to PSG on loan, and he’s been picking up rave reports throughout the period. Not only convincing Thomas Tuchel, Kean has managed to do the same with Mauricio Pochettino and impressed against Barcelona in the Champions League last week.

PSG then had something of a comedown when they lost 2-0 to AS Monaco on Sunday, and Kean hasn’t escaped the criticism.

Monday’s edition of L’Equipe rates him as just 3/10 and they state the Ligue 1 champions’ attack was ‘total nothingness’, with the rest, including Kylian Mbappe and Mauro Icardi, also in the line of fire. 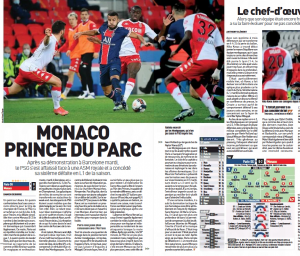 The Everton man was the only one to get a shot on target, yet the French newspaper still blasts his ‘lack of efficiency’.

Playing at PSG means huge expectations, and that can only help Kean and Everton in the medium term future.