Since the start of the year, we’ve been covering claims about Velez Sarsfield’s wonderkid Thiago Almada. He’s been linked to a number of Premier League sides, but no one really got close to taking him from Argentina.

Newspaper Olé features a piece about the winger today saying his price has gone up. The reason for that is his release clause, which automatically went from €23m to €25m.

The outlet says there are many European sides who’ve been following him, and three of them are named: Leeds United, Manchester City and Manchester United.

It’s claimed that those three clubs have been strongly linked to the 19-year-old, but truth is that none of them made a bid for him yet. 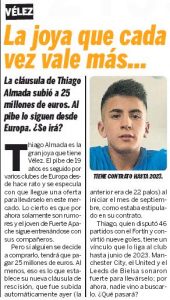 It’s Leeds United who have been linked most recently. The story cam following the club’s promotion to the Premier League, when Argentine outlets started pointing out several players who Marcelo Bielsa would like to bring to Elland Road.

The youngster even admitted he’d like to be managed by El Loco, but it seems Leeds are still to make any moves for the signing.