Nahitan Nandez and Leeds United continues to rumble on in the Italian media, and Monday’s claims are certainly interesting.

That seemed odd. Not to dismiss Nandez being worth such a sum, but going into negotiations willing to pay the full amount isn’t the usual approach to transfers, and certainly not for someone as experienced as Andrea Radrizzani.

Monday’s edition of La Nuova Sardegna reports Leeds United are closing in on the signing, even if there’s not an agreement yet. The newspaper states Marcelo Bielsa’s club have offered €15m for a one season loan deal, they’d then have an obligation clause to make the move permanent a year from now for €15m.

If that’s a true obligation clause then the deal is simply a €30m transfer, with completion deferred until the end of next season. 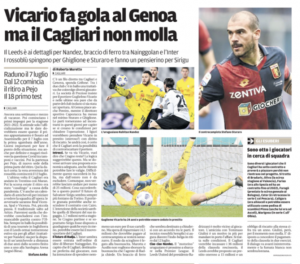 Cagliari chief Tommaso Giulini isn’t overly keen on that, but will accept payment of the €36m clause to be spread over two years.

Interestingly, there’s also the suggestion of a friendly match between Leeds United and Cagliari. A repeat of the 2019 game, but this time in England.