Gary McAllister has a special place in the hearts of many Leeds United supporters. He won the league with the Elland Road side in 1992, before returning to the club as manager in 2008.

Things started off well, however, it couldn’t continue and McAllister was eventually shown the door, later having a spell as caretaker manager at Aston Villa.

Following a break from the game, McAllister took up a role as Steven Gerrard’s assistant at Rangers, and is doing well with the Scottish Premiership club.

He’ll always be closely associated with Leeds United and this week’s edition of France Football has an interview with him, motivated by their larger feature on Marcelo Bielsa.

Leeds’ current boss in the subject of several pages of debate, with the magazine putting arguments for and against his genius status… with it suggested he may be an ‘imposter’ instead.

Having worked in France at Marseille and then Lille, there’s mixed feelings over whether Bielsa’s legend is justified.

Asked if Leeds are in good hands with Bielsa, McAllister replied: “He’s a coach who gives the team an identity of play, a very attractive style in which the Leeds supporters see themselves. His Leeds is not afraid to take risks, to attack, in a championship which is extraordinarily weary and physical.”

France Football then put it to McAllister that Bielsa’s critics say part of the problem with the manager is that his teams run out of steam before the end of the season, but he thinks it’s different pressures which weigh heavier at Leeds: “I don’t think that problem is there. The problem for this club is the incredible mental pressure on players who are not necessarily the best in the division.

“Patrick Bamford, for example, has enormous pressure on his shoulders. He’s the goalscorer, and when it goes a little worse for him, the team has a hard time converting their opportunities.

“I don’t know if we realise the size of this club outside Yorkshire. United is the only club in town, which is extremely rare in England. They have to be first in the area, and they see Sheffield United going fantastically with Chris Wilder… it’s not easy to live through. But talk to the fans, they are still fully behind them, they believe in them like me.” 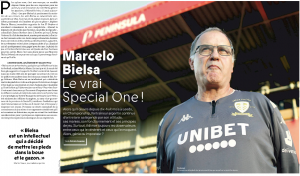 Asked if that includes believing in Bielsa, he said: “We are fortunate to have a manager respected around the world. We know what Simeone, Pochettino and Guardiola say about him. I consider myself more like a former player than a real technician, but I know how we talk about him among coaches, and it is always with respect and admiration. It’s great for Leeds to have a Bielsa at the helm, right?”

Should he secure promotion, the overwhelming answer will be yes.