Leroy Sané’s transfer to Bayern Munich, which once looked like a sure thing, now has a big cloud of doubt hovering over it.

The Manchester City winger looked set to return to Germany in the summer until he suffered a severe knee injury in the Community Shield against Liverpool, scuppering everything.

Following that, speculation the transfer could take place in January was rife, yet the month came and went, with the forward remaining at the Etihad.

We now have to wait until the summer transfer window to see if the 24-year-old will finally exit the Premier League champions, but there is now doubt in certain members of the German press the move will happen.

To make things clear, this isn’t anything to do with the injury, as the belief he will still be a great player upon his return appears to still be there, but it’s more the behind-the-scenes that has affected it all.

According to Kicker on Sunday, Sané was meant to arrive instead of Timo Werner, with the deal ‘being agreed with the Manchester City winger’, and a ‘second yes’ from the player followed in 2019.

However, that’s when the player ‘switched advisers’ and ‘suddenly, everything needed to be renegotiated’.

Kicker point out ‘this behaviour of Sané’s cannot be seen as confidence-building’, and it seems the fact the Manchester City forward’s decision to try and get a better deal, likely off the back of advice from his new agent, hasn’t gone down well in Bavaria. 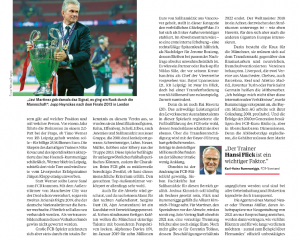 The German magazine explain the ‘big’ Bayern players like Oliver Kahn, Bastian Schweinsteiger, Manuel Neuer or Philip Lahm have always been ‘characterised by a total commitment’ to the club and they ‘confirmed their exceptional football skills and their character’.

Yet, when it comes to Sané, it’s stated that ‘at FC Bayern Munich, there are now legitimate doubts as to whether Sané meets this human criterion’.

He does, however, embody the sought after ‘top striker’.

It seems the Bundesliga champions now have to weigh the pros versus the cons and come to a decision.