Leeds United boss Marcelo Bielsa is eyeing up a move for Napoli striker Fernando Llorente as he seeks an alternative to summer signing Rodrigo.

That’s according to Tuttosport, who say the Spanish forward is ‘much appreciated’ by the Argentine boss.

Leeds have been keen to improve their forward line following promotion to the Premier League, and it would appear they may not be finished yet.

That has led him to look at his former player Llorente, who scored 34 goals in 89 games under Bielsa during their time together at Athletic Club Bilbao. 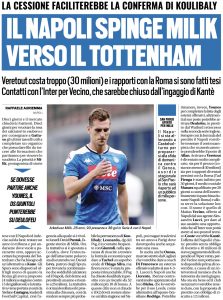 The 35-year-old is free to leave Napoli after falling down the pecking order following the big-money arrival of Victor Osimhen this summer and his experience in the Premier League with Swansea and Tottenham, as well as his experience with Bielsa, could be useful for Leeds.

Tuttosport do not mention if Bielsa and co have been in touch as yet, or whether Llorente is interested in a reunion, but they believe the interest is certainly there from Elland Road.