Leeds United are sitting on top of the Championship table with 71 points after 37 matches and are seven points clear of the play-off places.

Earlier this month, football in England was suspended due to the Coronavirus outbreak. On Thursday, the FA, Premier League and EFL issued a joint statement confirming the suspension has been extended until 30th April.

On March 18th, Leeds’ Mateusz Klich insisted it would be ‘unfair’ towards the Whites, if this season is declared void.

The 29-year-old has now discussed his day-to-day activities during an interview with Polish newspaper Przegląd Sportowy.

“We are going to limit going out and we are following the recommendations. Every morning we weigh ourselves, we send the results to the club, and wait,” the midfielder said.

“I go out for a run from home as it would be difficult to do it within four walls. We were given bars to monitor what we were doing from the club. They also brought us stationary bicycles, TRX (exercise bands).

“At the club they don’t impose on us when we must train since we have a whole day to do it. I’m exercising in the morning, which is what I can do. I run and use an improvised home gym. I can’t think of anything else.”

The Poland international also spoke about the different approach used by the authorities in the United Kingdom in dealing with the ongoing pandemic.

“In England, in the fight against the Coronavirus, they have tried to apply a different strategy than in Europe,” he explained.

“There have been horse races recently, the most important event of the year in this industry and a hundred thousand people gathered there. They thought it was impossible to isolate everyone.

“There are five thousand beds in intensive care units, of which four thousand are already in use. If the number increases, it will be difficult to treat everyone.

“The English would like to treat the sick as little as possible at the same time. They do not hide that hospitals are for older people; young people should sit at home.

“They emphasised that for them people above 70 are a priority, they got priority because they are the most vulnerable.”

Klich revealed an unnamed teammate’s surgery has been postponed because of the COVID-19 outbreak.

The Leeds player is also of the belief football in England would have continued, if not for Arsenal manager Mikel Arteta and Chelsea’s Callum Hudson-Odoi being tested positive.

“A teammate was supposed to have a hip operated on, but he heard from doctors that such surgeries are on hold for now. It is planned in the USA, but in the current situation no one knows if he will be able to fly there.

“So far, no Championship player has been tested positive. We didn’t have tests, they said that if you don’t have symptoms, they don’t do it. All in all, it’s logical. 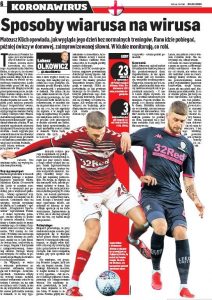 “Sure, were it not for the infection at Arteta and Hudson-Odoi, they would have still played with fans in the stadium.

“It’s good that Euro 2020 has been postponed, we should finish the league seasons first.

“UEFA announced that leagues should end by 30 June. Some players will see their [contract] expire on that day. If the season is extended it will be a mess. But it seems to me that everyone will get along, extend the contracts for the period in which you need to finish the game.”