Emerson Royal is set to complete his long awaited move to Barcelona this summer, after the Blaugrana and Real Betis signed him in a complicated joint transfer in 2019.

The right-back spoke over the weekend in Brazil and confirmed he’s set to move to the Camp Nou, and insisted he expects to play for Barcelona next season.

Having had a dream of wearing the club’s shirt, the 22-year-old clearly doesn’t have any desire to be used in a deal for someone else, or sold on quickly for a profit.

However, Barcelona are in deep financial trouble and Emerson’s feelings will not be too high on their list of priorities. This is where Arsenal could come in, with Mundo Deportivo reporting the Gunners are keen on the player.

Barcelona have ‘summoned’ Emerson’s agent for a meeting to decide what the next steps will be.

Along with Arsenal, Bayern Munich and Inter Milan are also credited with interest, and it’s 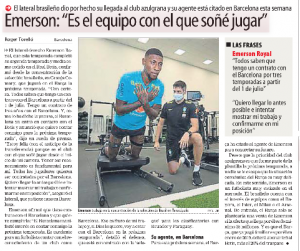 stated a sale would only be considered if an offer of ‘at least €25m’ arrives at the Camp Nou this summer.

Arsenal and others would surely have to seriously consider if it would be worth the gamble of signing a player whose Barcelona dream had just been ended before it begun.