Failure to win the Champions League ‘has always had consequences in Paris since the arrival of Petrodollars’, states Spanish newspaper Sport.

That Mauricio Pochettino also failed to win Ligue 1, something considered the absolute minimum, means his time at PSG so far has not been a success. It will especially hurt those in charge at the French club that Thomas Tuchel lifted the trophy for Chelsea on Saturday evening, and the added focus on their decision making brings extra pressure on everyone at PSG.

Despite that, it’s not thought the manager is in danger. However, he’s ‘not quite comfortable’ at PSG, and that’s encouraging the claims of a possible move to Tottenham or Real Madrid.

Sport insist Pochettino is a candidate for both Tottenham and Madrid, and is so tempted by the possibilities that he’s ‘willing to ask the impossible’ of PSG’s owners. That would be to let him leave regardless of his contract situation.

As far as Sport are concerned, that won’t be an easy task. PSG won’t want to lose face and will be stinging already due to Tuchel’s Chelsea success, so they won’t want to look like they’ve been walked all over. 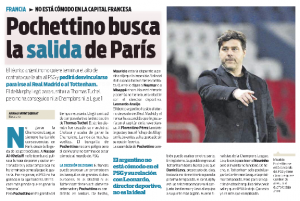 That could make it difficult for Pochettino, and the process would take some time.

So, even if he were successful in convincing PSG over an exit, Real Madrid and Tottenham would likely have to wait weeks to find out.